Conference and Meeting in Bratislava 2014 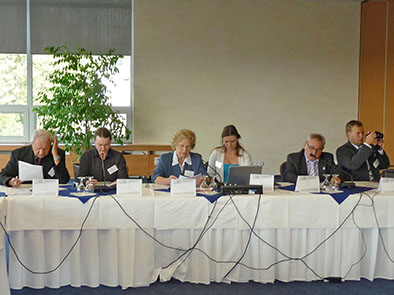 The organisation of the conference and meeting was done by the Slovakian Association of Antifascist Fighters under the leadership of Pavel Sečkar, Eng., and Juraj Drotár, PhD.

Branislav Ondruša, PhD, the secretary to the Slovakian Ministry of Labour, Family and Social Affairs, also actively participated at the meetings.

With the inclusion of Belarus and Estonia in the International Committee, the number of members from all societies and organisations has increased to 850,000 victims of Fascism and Nazism in 2013.

At the meeting in Bratislava, a considerable number of decisions were adopted; below we have listed a few.

It is necessary to do everything possible to involve other organisations and societies that include victims of World War II in the international committee.

At the meeting in Bratislava, the contents of a public letter were agreed upon – the resolution for the president of the European parliament and presidents of European countries. All the delegations which were at the meeting signed this letter.

It was agreed that all the organisations would contribute photographs and publications for the European Museum of the Violence of Fascism and Nazism that is being constructed at the Rajhenburg castle in Slovenia.

At the meeting in Prague in 2015, the order of the International Committee meetings for the coming years will be determined.

As the mandate of International Committee members lasts four years, and those of the president and the vice-president two years, the election for the following four and two year mandates were also held in Bratislava.

The following people were elected as members of the International Committee of Deportees and Refugees Victims of Fascism and Nazism during 1920-1945:

Ivica – Ivanka Žnidaršič, Prof., Slovenia, was elected as the president of the International Committee.

The following were elected as vice-presidents:

Gregor Kaplan, Slovenia, was elected as the secretary.

In this brochure we have published only a section of the material that we dealt with in Bratislava. Unfortunately we were unable to publish the wealth of discussions by the members at the meeting, nor a description of the cultural programme and the socialising at the concluding meeting at the museum.

What we are publishing is a letter sent to the European Union and presidents of European countries, to which we have so far received replies from: England, France, Germany, Austria, Switzerland, the Netherlands, Monaco, Luxembourg, Spain and Slovakia.

We also published a letter from the International Association for the Memory of the Holocaust, who sent this letter as a reply to our request to include genocidal policies towards Slavic nations during World War II to the concept of the holocaust, and the letter from Yorgos Mitralias from Greece, who drew up the European antifascist manifesto and announced the congress against Fascism and Nazism.

of the International Committee